Our home is more than a roof over our heads. It is also where we grow our food, including meat and vegetables; it is where we both work on our non-farm projects – writing, editing and translations, and it is where we feel the most at peace. 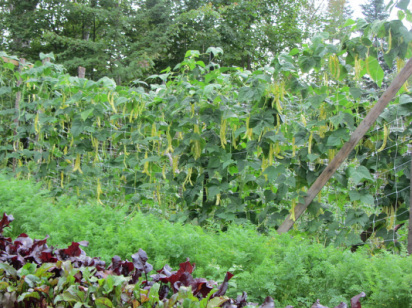 Every year is different, but there are always good elements and those are the ones that sustain us. Beets in the foreground, carrots and beans behind.


From Our First Night...
We couldn’t sleep that first night, December 21, 1978. Five months of 14-hour days building the house, seven days a week, and we were finally lying on a mattress on the floor upstairs with our baby in his crib not far away. There were no partition walls and the stairs were dangerously rudimentary, but we had achieved our first objective: to live on our own homestead north of Montreal on the rocky Canadian Shield, and to do it without a mortgage.


As a teenager, I had built a log cabin, ten by eleven feet, in the woods far from any roads but as a young man, I rediscovered it as a refuge and lived there for three years, off the grid, keeping a Styrofoam block on the surface of a creek to keep that small surface from freezing. Sheila left the city behind, opting for the countryside only a few minutes from my refuge in 1975, the same year I moved to a small town in the Eastern Townships with the intention to learn how to farm. We had not yet met, but a year later Sheila decided to move to that same small town in the Eastern Townships in February 1976. We were married in August.

In early July of 1978, we moved back to my refuge and began to build a homestead. After I had left three years earlier, a road had been built and electric power was available although not hooked up to the cabin. With the crib on the main floor and our room in the loft, we lived in the cabin, working through the summer days on our real house until a falling beam caught Sheila on the leg. Crutches slowed her down but her main job, designing the house, was mostly done.

That first day in our new home the snow was waist-deep but the pump wasn’t drawing. Without water it was only a larger version of the cabin. I carried a gas-powered pump the few hundred feet down to the well, shovelled off the snow, pulled up the concrete cover and dropped the pipe in. As I poured water into the priming chamber, it froze solid. Back to the house to thaw. When I returned I primed with rubbing alcohol. Scaling down the ladder into the well, watching as water froze on the concrete wall, I discovered we had been given a defective foot-valve.


Once we had water, the cow, the calf and the chickens moved into the log cabin. In the spring we would plant asparagus next to the septic field.

Two children, three grandchildren, poultry, greenhouses, four outbuildings and six gardens and a shared business career later, we live happily in our home near that same small refuge. We are a part of the Laurentian community, both being able to trace roots here back to the early decades of the 20th century, and we focus on our family, our gardens, my writing and Sheila's editing and translating services as well as her crafts.

A passion for chocolate, coffee and other ‘essentials’ as well as the need to feed our birds, keeps us from being self-sufficient, but between the last frost date of June 12 and the first risk of frost in early September we manage to grow everything else. Over three-and-a-half decades, the chickens have helped us create real garden soil. Our red meat comes on the hoof from like-minded neighbours and the trapper trades fine wild meat for chickens, providing us the exquisite delight of beaver, moose and others.

We worked off of our homestead for 25 years, maintaining our gardens and never losing track of our priorities, preparing for the day we could park the car and stay put. But self-reliance must fit into a greater community concept. As the years slow us down, Sheila, always the designer, conceived of the benefits of Wwoofers. Since 2007, they have joined us from four continents – a dozen different countries. They have come to learn, teach and share, and now our homestead community has spread its spirit around the world.
Joseph Graham and Sheila Eskenazi